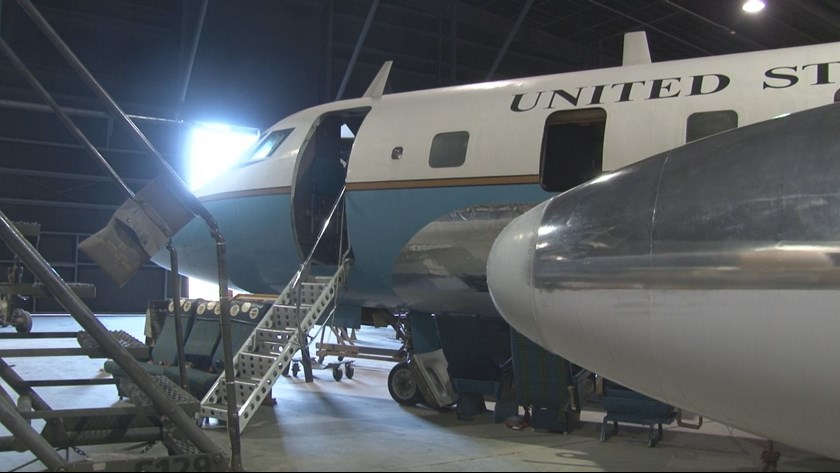 Former Air Force One awaits restoration at Museum of Aviation

In the back of a hangar at the Museum of Aviation sits a plane Curator Mike Rowland describes as one of the most important of the Vietnam era.

“We have examples of airplanes that flew in combat in the Vietnam era, but this airplane is the airplane that the commander in chief was flying on,” he says. “By preserving it we provide to current and future generations a connection to this history. The president actually flew on this airplane.”

That was President Lyndon Johnson. Rowland says Johnson flew on this plane as Vice President and later as President.

He says, at the time, this VC 140 Jetstar plane was cutting edge technology.

“When this plane went into service in the early 1960s, there was still a big transition going on from propeller planes to jets,” he says. “This was the very first type of business jet to go into service.”

Half a century later, the plane has a more vintage look. It was retired and sent to a yard in Arizona with many other former government planes. Rowland says the Museum of Aviation reached out to bring the aircraft to central Georgia.

The plane has been sitting in a hangar at the museum since 2008. Rowland says they hope to restore it back to its former glory sometime in the next few years and put this piece of American history on display for all to see.

Roaring ‘20s to come to life at B-17 fundraiser event