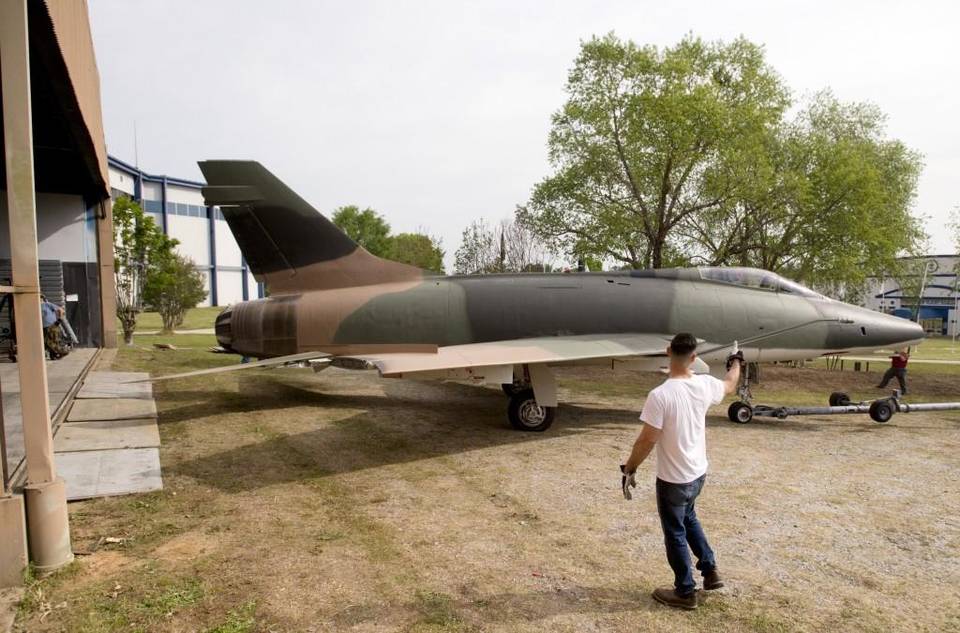 An event years in the making took place at the Museum of Aviation on Wednesday.

In 2010, a weathered old F-100D Super Sabre arrived at the museum on the back of a flat bed truck. Wednesday morning, a crew rolled it almost fully restored into its permanent home. The plane will be the first thing people see when they walk into the doors of Hangar One, which is devoted to the Vietnam War.

“This means the world to me,” said Aaron Robinson, who started working on the plane three years ago as a volunteer. “I’ve seen it slowly progress and to actually see it in place is a really big deal.”

Retired Maj. Gen. Rick Goddard, who commanded the Warner Robins Air Logistics Center at Robins Air Force Base, flew 180 combat missions in the plane. For his actions during one of those he was awarded the Silver Star, which is the Air Force’s third highest combat medal.

The museum acquired the plane after Goddard tracked it down and discovered it was sitting on a pedestal outside of Otis Air Force Base in Massachusetts.

The museum had an F-100, but it had no combat history. So a trade was worked out in which the museum sent its F-100, which was in better shape, to replace the one in Massachusetts. In return the museum got a plane with a good story behind it.

But it was in need of extensive restoration. Museum officials originally hoped to have it ready for display in 2013, but after budget cuts it sat for almost three years with nothing done to it.

Then volunteers started working on it, including Robinson. A retired Air Force maintainer, he is now a full-time employee at the museum but started out as a volunteer working on the F-100. Often working beside him was Goddard, who devoted many hours to restoring his plane.

Robinson worked under Goddard’s command at Robins, but never met him until the two started working on the plane together.

“I gained a lot of respect for him,” Robinson said. “Gen. Goddard did everything I asked him to do, and it didn’t matter if it was a dirty, grimy job. He would jump right in and take it on. He has more talent for than I think he realizes.”

Goddard, who now lives in Athens, was not there Wednesday to see the plane moved.

Using photos that Goddard provided, the plane was restored with the same camouflage color scheme it had in Vietnam. About all that is left to be done is to put some of the exterior lettering and emblems on it.

Museum Director Ken Emery said a ribbon-cutting ceremony will be held in about a month to celebrate the restoration. He said the project mostly took a lot of volunteer man hours and didn’t actually cost much money. He said the reliance on volunteers is why it took so long to complete.

“It’s one of the few combat F-100s still in existence and we wanted to take good care of it,” he said. “So we went the extra mile, doing a lot of extra work on it, making sure it was as complete and as correct as we could possibly make it.”

The move itself that took place Wednesday took weeks of planning. An F-105 Thunderchief in Hangar One had to be moved to get the F-100 to its spot in the center front of the building. The F-105 tail had to be removed because it was too high to get under the door. The base provided and aircraft tow vehicle and driver who pulled the F-105 out, then moved the F-100 in and put the F-105 back.