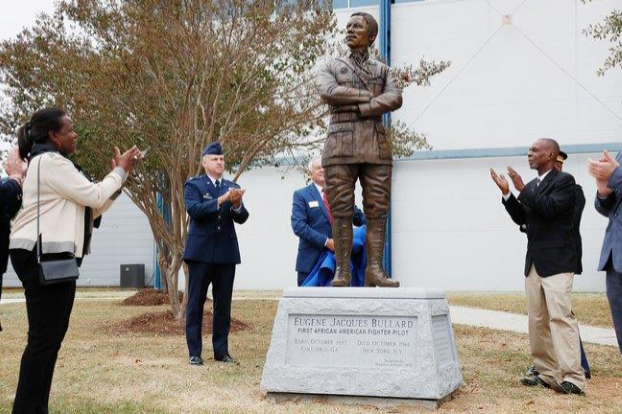 Eugene Bullard, the first African-American fighter pilot, is now memorialized with a statue at an aviation museum in Georgia.
The statue was unveiled during a ceremony on Wednesday at the Museum of Aviation in Warner Robins, Georgia, according to CNN. The museum is located next to Robins Air Force base, south of Atlanta.
The unveiling took place on what would have been Bullard’s 125th birthday, The Atlanta Journal-Constitution reported. The pilot’s descendants were in attendance in addition to U.S. troops and French officials. 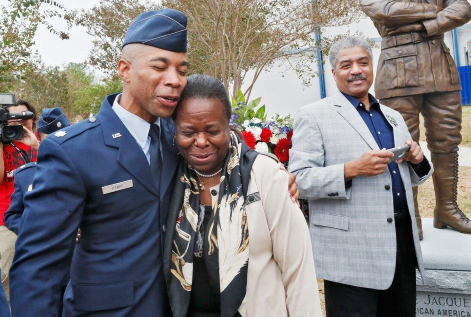 Bullard’s distant cousin, Harriett Bullard White, told CNN that she cried tears of joy during the ceremony.
“All my life I’d known how great he was. Of course, no one else knew who he is,” White told the outlet. “He’s an American hero and someone all Americans should know about.”
According to the Smithsonian National Air and Space Museum, Bullard ran away from home as an 11-year-old and spent years traversing the South before stowing away on a ship to Scotland. Once in Europe, he settled in France in 1913.

Harriett Bullard White with Lt. Col.Christopher Banks BOB ANDRES/ATLANTA JOURNAL-CONSTITUTION VIA AP
Bullard enlisted in the French Foreign Legion during World War I, and served with the 170th Infantry Regiment until he was wounded in battle.
After his injury, Bullard bet a friend $2,000 that he could join France’s military aviation service despite his skin color. He won the bet, entering the Aéronautique Militaire in November 1916. The next year, he claimed two aerial victories, though accounts vary on whether they could be confirmed.
According to the Smithsonian, Bullard attempted to join the United States Air Service after the U.S. joined World War I in 1917, but “was rejected because of the racial prejudice that existed in the American military during that time.” The U.S. Armed Forces were desegregated in 1948.
After the war, Bullard owned a nightclub and a bar in France, and “rubbed elbows” with other notable figures from his time including Langston Hughes, F. Scott Fitzgerald, and Josephine Baker, the Smithsonian said.
He also enlisted in the 51st Infantry Regiment during World War II, before he was severely injured and returned to the U.S. Then, he became involved in the civil rights movement and was posthumously commissioned as a second lieutenant in the U.S. Air Force in 1994.
“You must remember that, years ago, most people were pretty sure that, if you had black skin, you were probably pretty stupid — you probably couldn’t fly a sophisticated machine like an airplane. This guy proved you can,” Hillard Pouncy Jr., one of the original Tuskegee Airmen, said before Wednesday’s ceremony, according to the Journal-Constitution.
“The Civil Rights Movement really started when the Army started letting black guys fly,” he continued. “They proved to the world they are just as smart or just as dumb as anybody else.”